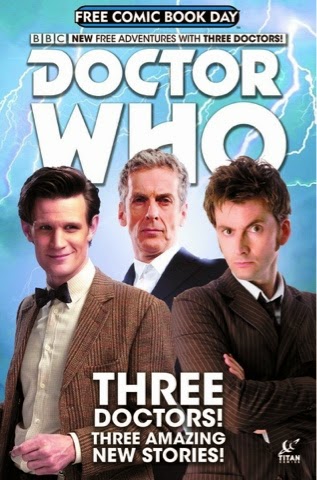 Click the link below to read about the upcoming series from Titan Comics beginning this August - including the surprise author!
http://m.hollywoodreporter.com/entry/view/id/916450
Posted by Doctor Who: Panel to Panel at 10:30 AM No comments:

Titan Comics is set for a full Doctor Who takeover of London Super Comic Con on March 14 & 15 with the launch of the new Ninth Doctor mini series, Doctor Who panel and signings!
DOCTOR WHO COMICS PANEL

Every person who attends the panel will receive a special Doctor Who Comics poster and the chance to win cool Doctor Who merchandise!

All signings will be held at Titan and Forbidden Planet Booth #D115- D121.

DOCTOR WHO: THE NINTH DOCTOR #1

Cavan Scott (Doctor Who: Ninth Doctor comics series) and artist Christian Ward will be signing copies of an exclusive Forbidden Planet/LSCC variant of Doctor Who: The Ninth Doctor issue #1.

Can’t make the show? You can pre-order a signed copy of Doctor Who: The Ninth Doctor #1 Forbidden Planet/LSCC variant by Cavan Scott and Christian Ward here

DOCTOR WHO: THE ELEVENTH DOCTOR

Titan Comics editor David Leach will be available to review your portfolio.

More to be confirmed.

To keep up to date with news about Doctor Who Comics at London Super Comic Con join Titan Comics on Facebook,Twitter or Tumblr.

Posted by Doctor Who: Panel to Panel at 8:58 PM No comments: