Supremacy of the Cybermen Special Covers and Merchandise!

Following on from last weeks news about Titan's 2016 Doctor Who crossover comic featuring the Ninth, Tenth, Eleventh and Twelfth Doctors. I wanted to share with you some other Doctor Who items also available to pick up in stores on Doctor Who Comics Day - Saturday July 9.

Posted by Doctor Who: Panel to Panel at 1:57 PM No comments:

Supremacy of the Cybermen Coming This Summer! 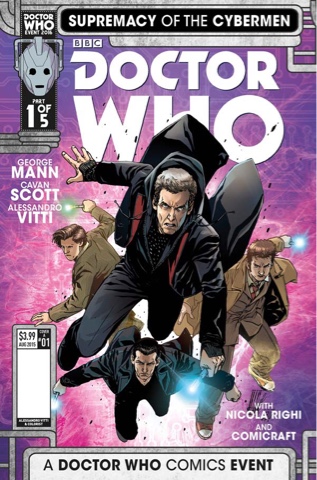 April 19, 2016 – BBC Worldwide North America and Titan Comics are thrilled to reveal that this summer’s special Doctor Who event comic will feature the Ninth, Tenth, Eleventh, and Twelfth Doctors from Titan’s four ongoing Doctor Who series. This comic will be a spectacular five-part, bi-weekly adventure featuring one of the Doctor’s most iconic foes – the Cybermen!

2016 marks the 50th anniversary of the show’s iconic cyborgs, the Cybermen. The Cybermen first appeared in the serial ‘The Tenth Planet’ in 1966, and have been featured in Doctor Who numerous times since, including the 2006 two-part modern origin story, ‘Rise of the Cybermen’ and ‘The Age of Steel.’

Exiled from Gallifrey at the very end of time, Rassilon, fallen leader of the Time Lords, has been captured by the last of the Cybermen. Now, the Cybermen have access to time travel. With it, every defeat becomes a victory. Every foe is now dead -- or Cyberized.

The debut issue comes with five variant covers to collect: an art cover by series artist Alessandro Vitti, a photo cover by Will Brooks, a cool Cybermen variant by Fabio Listrani, a blank sketch variant, and a fun coloring variant – perfect to color in at home or in stores on Doctor Who Comics Day.

This year’s global Doctor Who Comics Day event on Saturday, July 9th, is set to be even bigger than previous years with new comics and collections, merchandise, variant covers, signings, and events across the globe at comic shops, bookstores, retail chains, libraries, and on digital platforms. New to this year’s event, Doctor Who comics fans can register for an event kit to hold their own reading group parties.  Doctor Who comics fans, retailers, and librarians should visit Titan-Comics.com for details to sign-up.

Retailers can order both issue #1 and issue #2 of Doctor Who Event 2016: Supremacy of the Cybermen from the May edition of PREVIEWS. Doctor Who fans will not want to miss out on this spectacular crossover event series! Fans can find their nearest comic store at ComicShopLocator.com.

To keep up to date with news about Doctor Who Event 2016: Supremacy of the Cybermen and this year’s Doctor Who Comics Day, follow Titan Comics on Twitter, Facebook, and Tumblr. 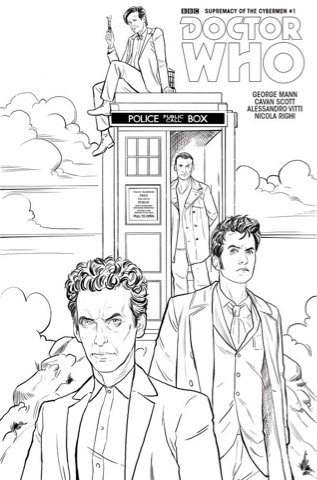 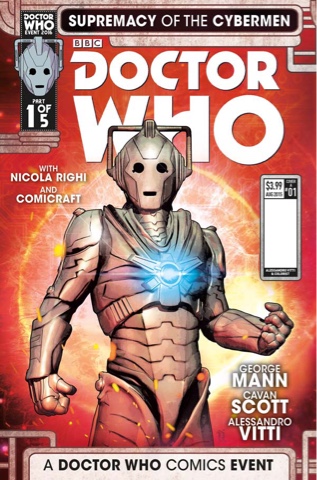 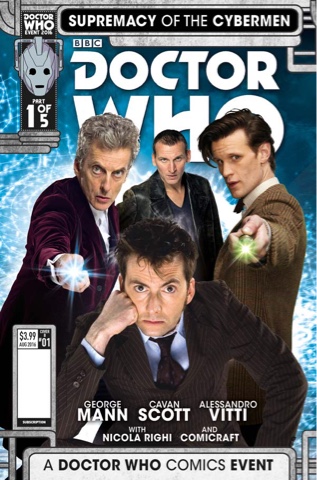 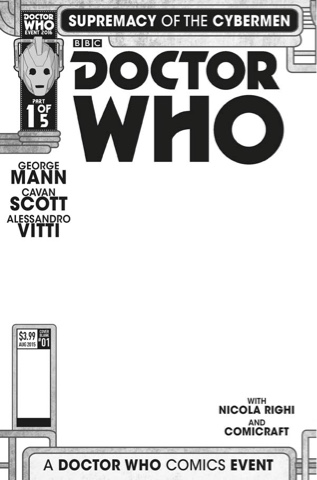 Posted by Doctor Who: Panel to Panel at 9:49 PM No comments:

Titan Comics is excited to announce that Doctor Who TV spinoff Torchwood is back, in an all-new ongoing comic series starring the daring Captain Jack Harkness and Gwen Cooper.

Written by Captain Jack himself – John Barrowman – and Carole E. Barrowman, and with issues illustrated by Antonio Fuso (Drive, The Girl Who Kicked the Hornet’s Nest) and Pasquale Qualano (Batman ’66, She Hulk, Harley Quinn), this spectacular original ongoing series is not to be missed.

In continuity with the new hit Torchwood audio dramas from Big Finish, as part of the official continuation of the Torchwood saga, the comic arrives in stores on July 6 – the week of Titan’s third annual Doctor Who Comics Day event – Saturday, July 9 2016.

The BAFTA-winning cult science-fiction drama by Doctor Who showrunner Russell T Davies, which aired for four successful seasons from 2006 to 2011, follows the exploits of Captain Jack, Gwen (Eve Myles - Broadchurch), and their team as they investigate the unusual, the strange, and the extraterrestrial.

The hotly anticipated Torchwood comic sees Captain Jack return to Cardiff to engage the help of the last person who expected to see him again, Gwen Cooper! A dark technology from a forgotten species has been claimed by a conspiratorial power… and in this collision between an ancient civilization and an all-new evil, the Earth itself may be forfeit! Only Jack, Gwen, and their allies from what remains of Torchwood hold the key to stopping a cataclysmic wave of destruction… On the road, on the run, and under fire – can Jack and Gwen put aside their differences and rebuild the heart of Torchwood… before its flame is stamped out forever?! 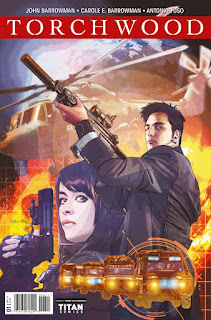 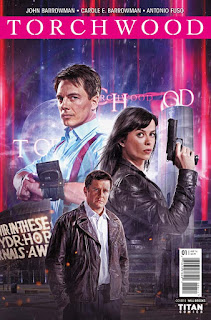 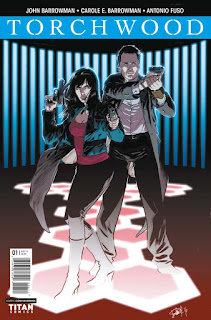 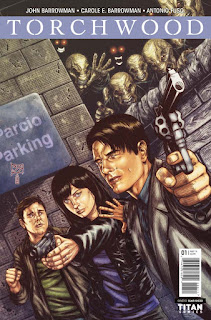 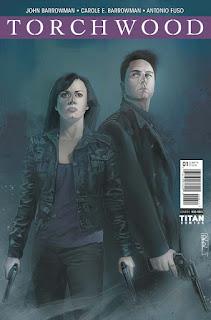 Posted by Doctor Who: Panel to Panel at 9:06 PM No comments:

Sorry for the delay in getting this posted, but here are the solicitations for upcoming Doctor Who comics and magazine in the new issue of Previews!
﻿ 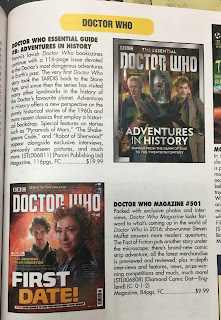 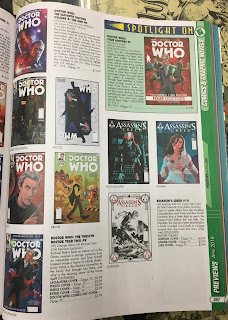 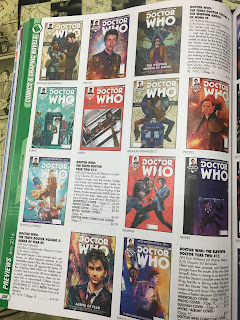 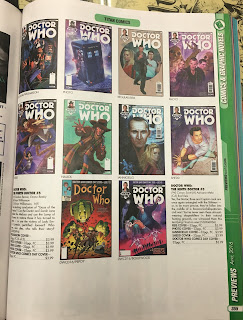 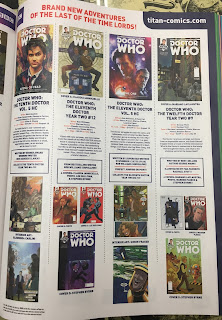 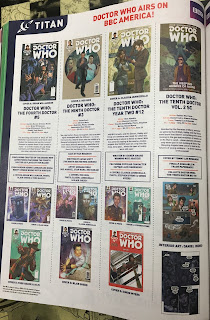 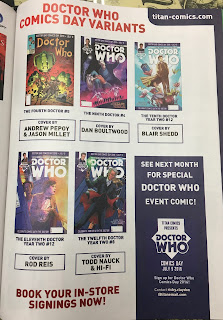 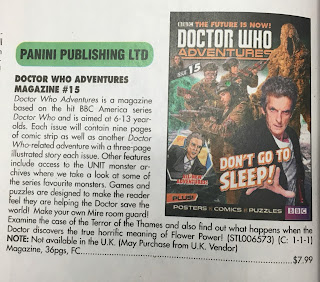 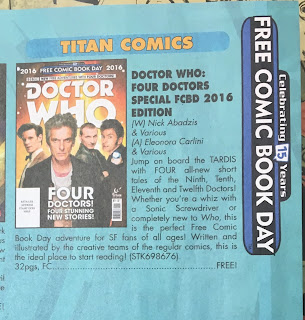 Posted by Doctor Who: Panel to Panel at 9:01 PM No comments:

Next week sees the debut of the Ninth Doctor ongoing series. To get you ready, here are some preview pages from writer Cavan Scott and artist Adriana Melo! 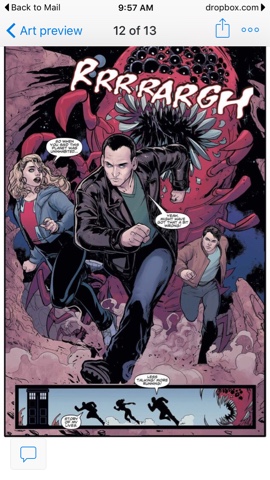 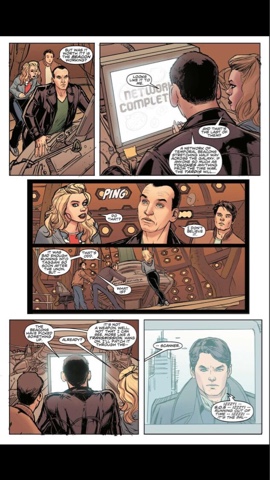 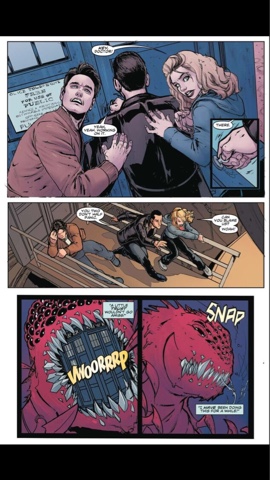 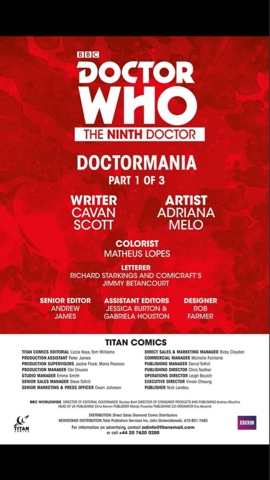 Posted by Doctor Who: Panel to Panel at 9:43 AM No comments: