In the latest issue of Doctor Who Magazine editor Marcus Hearn announced subtly that the comic strip was going to take another break from the pages of DWM. Last year the comic was paused for several months during the height of covid in order to save the expense associated with it. Once again this is the case.

Everyone knows that the comic strip is the most expensive part of Doctor Who Magazine to produce, which is why it has been necessary to stop putting it in. However, I don't think that anyone who is a Doctor Who comic fan wants to see it go away completely, which isn't the plans of the creators of DWM. For many, the comic is the first thing that is read and the most important part of the book. And for me personally I see it as Panini's way of creating their own Doctor Who content in a magazine full of non-fiction.

I encourage everyone who is a Doctor Who comic fan to politely send an email to Panini at dwm@panini.co.uk and let them know how much you enjoy reading the monthly adventures of the Doctor. You don't have to complain that they are taking a break from the strip or express your concern that perhaps it won't return, but just tell them that you enjoy the comic and look forward to its return. Showing interest will let them know how important the strip is - and keep it going for years to come.

Posted by Doctor Who: Panel to Panel at 7:47 AM No comments:

Here are the listings for Doctor Who comic products coming out in May. Make sure you let your local comic shop know what you want! 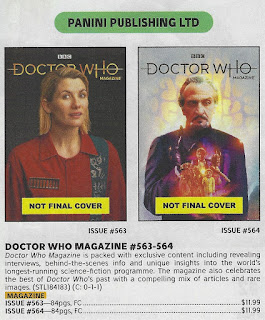 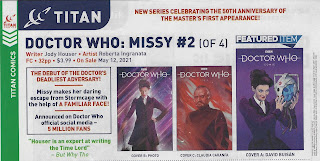 Posted by Doctor Who: Panel to Panel at 7:38 AM No comments: