San Diego Comic Con is days away and Titan Comics will be there! You can get an exclusive variant cover to the Thirteenth Doctor #9 as well as meet writer Jody Houser, plus sit in on a panel with Jody and comic writer Richard Dinnick! Check out the info and variant cover below. 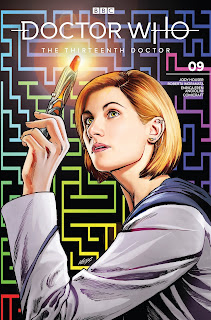 Authors Jody Houser and Richard Dinnick will be signing a range of Thirteenth Doctor comics and graphic novels – including an exclusive show variant of The Thirteenth Doctor #9!
Posted by Doctor Who: Panel to Panel at 8:16 PM